September 15, it is one of the most commemorative dates in Mexico, as the anniversary of the independence of Mexicans is celebrated.

It commemorates the day in which the priest Miguel Hidalgo y Costilla, ringing the bells of his church, summoned the people of Dolores Hidalgo, to rise in arms against the rule of the Spanish government, at dawn on September 16, 1810. 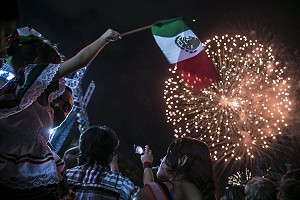 In Mexico, this is a holiday, it is a day to celebrate, a day of coexistence where different recreational activities are carried out, accompanied by traditional Mexican food and drinks.

In Cancun, there are a large number of events and activities in celebration of our independence day, hotels, restaurants, theme parks, clubs and others, open their doors with Mexican themes to spend a 15 (and early 16 September), unforgettable.