Every year, during the celebration of the Día de Muertos in the Yucatan Peninsula, there is a tradition of eating a delicious food called Mucbipollo, also known as Pibipollo, Mukbil Pollo or only Pib. 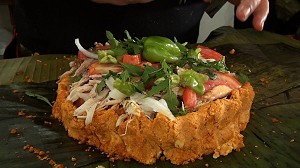 It is similar to a cast tamale, of a slightly harder consistency, solid edges and the size of a cake.

Its name of Mayan origin is translated as “something that must be buried” and as the name implies, this dish is prepared in an underground oven, firewood is lit and stone plates are placed, heated and on these the pib, cover with banana leaves and let it bake. 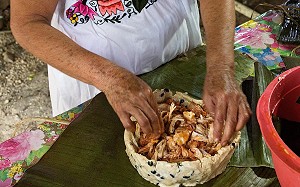 Mucbipollo is the ancestral dish used to commemorate the deceased faithful during the Día de Muertos festivities or as it is known in Yucatan, Hanal Pixan and only prepares for these dates, considered one of the most important for the Maya. 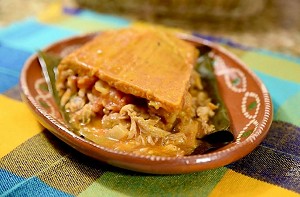 You can find this dish throughout the Yucatan Peninsula, in local restaurants, small stores and even in private homes.